You are here: Home / causes / Dog Starved in the Name of Art…DISGUSTING!! 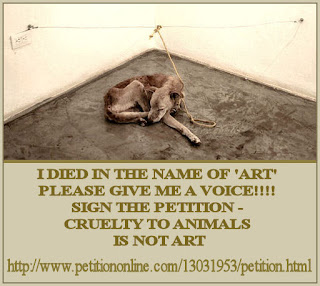 This is just horrible and I was physically sick when I saw it. The page is in a different language and the pictures are quite shocking and horrible to see.

What I find completely odd is that “El Perrito Vive” translates to “The Dog Lives”…which sadly, no it doesn’t. This is sick and just plain wrong.

I got this from a dog forum I am a member of.

Here is information from the petition. Also, he has now been brought up ..s in Costa Rica.

On 2007 Guillermo Vargas Habacuc, a fake artist, took a street dog, he tied him with a short rope to a wall of an art gallery and he let him die slowly of starvation and thirst, as “installation”.

During the several days , the author of this horrible cruelty and the visitors of this Art Gallery (shame on them) they remain careless witnesses in front of the agony of the poor animal, until at last he died of starving and thirst, for sure after spending a painful, absurd, suffering.
That’s not all: the prestigious CentroAmerican Biennial of Art decided, (shame on them) that the brutality that has been made by this person was art, and on this incomprehensible way Guillermo Vargas Habacuc has been invited to repeat the cruel “installation” at the next Biennial on 2008.

The bottom text after all the dog pictures translates (via Google) to the following:

According knew the dog died the next day for lack of food. During the inauguration knew that the dog was chased in the afternoon between the houses of cardboard and aluminum of a neighborhood of Managua with the name of a saint that Habakkuk who was unable to specify at the time. 5 children of those who helped in the capture of 10 cordobas received bonuses for their cooperation. During the exhibition some people called for the release of the dog, which he refuses artist. The name of the dog was (was) Nativity, and I leave him to die of hunger in full view of everyone, as if the death of a poor dog was a shameless media show in which no one does nothing but applaud or look puzzled.

Definitely we are what we read: pure croquettes.

In the place that the dog was exposed only have a metal cable and a rope. The dog was extremely ill, renqueaba and did not want to eat anyway, so in a natural environment would have died anyway, but so are all the poor dogs: sooner or later they die or are killed.