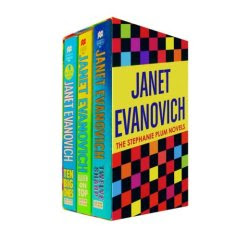 My supervisor has brought me in all of these audio books for me to listen to at work. I love listening to them, it’s like mindless chatter. A few have been steamy romance novels, some have been good drama types and most have been the number books by Janet Evanovich.

They are excellent! Fast paced, funny, mysterious, sexy…but not too overbearing. I really have been enjoying them.

I really think it has to do with who’s also reading the books because the woman reading them is AWESOME! She does voices and it really reminds me of the Harry Potter books on CD…the guy who reads them makes them as wonderful as they are on CD/tape.

The only problem with listening to multiple books…and we’re talking about 6 books…with the same characters is that now I’ve been almost thinking they’re real people. Like a TV show kind of…and not that I’m so far out there than I think fiction is reality… I know better, but it’s like I KNOW these characters that i almost think I could run into Stephanie Plum or Morelli her cop boyfriend on the streets. Crazy, I know. I’ve been listening to them just a little too much.

But they are really good if you’re into that kind of thing.

I think when I finish the one I’m on now, I’ll switch to something else. It’s time.