You are here: Home / husband / Garbage, the Husband and the OCD 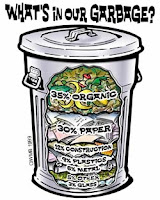 My husband and I went out to dinner last night to Chili’s and then we went to Costco because I had gotten a giftcard for my birthday from his sister and her family in Australia. After that we ran to CVS to pick him up some iron since he’s anemic again and also his script for pain meds for his back.

When we got home the trash can was on its side and there was garbage strewn from the front door to the back door!!

So basically, we left Topaz out (didn’t crate him) because we were only going to be gone for a couple hours and we didn’t have anything on top of the trash can. I didn’t realize it was full, or I would have put a laundry soap container on top of it like we usually do.

This has happened before when I went out alone for a few hours and dh was at work. I just cleaned up the trash and went about my business.

My husband, however, starts swearing and yelling…just in general, not at anyone. And basically freaking out. He went and changed clothes and then swept the trash in a pile in the kitchen. He then asks if I can get the trash pile while he vacuums the living room/hallway. I was like huh? He said there was trash all over here, i need to vacuum. Ok…then I picked up all the trash and he said, “you’re gonna wash the floor right?” I was like, “wasn’t planning on it”. He said he’d do it because he won’t walk on it if it’s not washed.

Maybe that sounds normal to someone. To me…this is his OCD at work.

Now, I’m not just saying he has OCD because he does some quirky things. He’s been diagnosed with depression with OCD tendencies. And yeah, there are many reasons why…

He’s not a hand washer, but he is a hand washer. We go through more hand soap in this house, I cannot keep it in the dispensers. I need to buy stock in it.

He washes clothes too…a lot. He washes everything, including jackets all.the.time. I’d say he does a load of something everyday. Not necessarily bad, it’s good to be clean, but it’s really and truly excessive.

I don’t think he needs medication or anything for it. And I know we all kind of have little OCD things we do. I put things that come in colors in “rainbow order” all the time. I also will line up my pencils by height. There are other little things I do as well. We all have our little things, right?

But last night with the trash and the vacuuming and washing the floor, it was just a little much!!