This is kind of late, but I was watching TransAmerica on Lifetime and wanted to finish it before I really got into writing a blog and posting my scrappy layout for the day. The movie was good. Kind of weird to see a woman playing a man dressing as a woman, but the movie was good.

Earlier this evening, I had to cut some mats off the back end of Topaz. We’ve totally neglected to pay attention to his hind end. He won’t let me brush that area so it got so matted. I had to cut them down pretty close to the skin so now the poor boy has a really bad cut on his back end! I feel really bad, I hope he doesn’t get a complex…but the mats are gone. And I’ll have to keep up on the brushing to make sure he doesn’t get anymore. Unfortunately, I didn’t get pictures. Maybe tomorrow. He also slept a lot after he was outside “swimming”…I really hope he’s ok. It’s been 94 days since his last seizure and I’d like to keep that streak going!

On to the scrappy things because I have to get to bed.

This page is of my husband. Because of his diseases, he has memory loss. It’s so frustrating at times, but we really try to keep things light and fun, so I’ve been telling him to look on the bright side…when he watches tv, there’s never a rerun on! He doesn’t ever remember if he’s seen that episode or not! haha. I’m not making fun, really. I’m trying to make the best out of a not so great situation…what else can ya do? It’s all in love anyways. 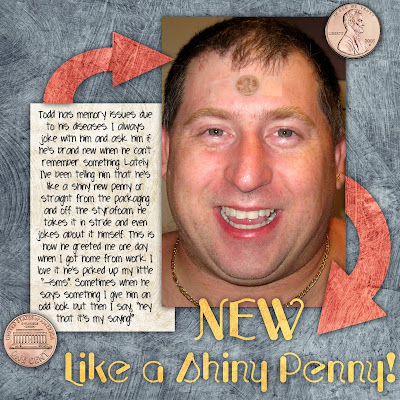 No Ass Packing For This Girl!!