Well tomorrow is the day…All this election BS will finally be over…the news reports, the commercials, the phone calls…and we’ll know who the next President of the United States will be. I am off work, so the hubbs and I will be voting fairly early I believe…since they are expecting long lines at the polls.

I honestly don’t care who anyone is voting for, everyone has their own political view and opinions and that’s great! Just do make sure that you go out and vote tomorrow. This is an important election and I’ll probably be up half the night to see who the winner is.

Tonight I made a spaghetti for dinner. lol That’s what I call it anyway…”a spaghetti”. lol

I make it with turkey meat, italian is the best, but tonight we had regular…lean turkey…a can of sliced mushrooms…big can, the hubbs and I love the mushroom…a green pepper…fresh from the farmer’s market!…garlic salt…and a bottle of Classico “Traditional Sweet Basil” pasta sauce. Oh, and wheat spaghetti noodles.

I break the noodles and get them going, or the water boiling for them anyways. I cut the pepper up and started cooking it, the mushrooms and some garlic salt in olive oil…added the meat and cooked that until the meat was all good and cooked. Then I dumped the bottle of sauce in and let it simmer…drain the noodles and then put the noodles into a large rectangle glass pan, dump the sauce on…mix and add mozz cheese to the top and bake in the oven for a bit. YUM!!

It’s delish!! Tonight I also added a few leaves of spinach…just to see if it changed anything. I dunno if it did, but it was extra yummy tonight!! And it’s one of the hubbs’ favorite meals too. Plus being that it’s turkey meat, has the extra veggies and all, and it’s got wheat noodles…it’s not all that bad for you.

Sometimes I make garlic bread from leftover hamburger/hotdog buns or something, but tonight I didn’t. I could have though, because we did have some hotdog buns…but I didn’t feel like it. We didn’t need it anyway…the spaghetti was plenty!!

Tomorrow I have to make some veggie goop, and mix it with meat and get Topaz’s food ready to go for him. We had bought some Veggies from our food girl that were by Oma’s…VEGGIE 5 WAY( Olewo Carrot, Green bean, Yellow Squash, Zucchini, and Garlic) 2#bag…and the dogs really seem to like that. I think the garlic had the most to do with it, it was really smelly…not bad, just smelled like food.

I’m hoping to get a big batch of food ready for him and then freeze some individual packages that are already weighed out and everything. Easy for feeding and everything. I have 2 packages of pork chops ready to go into the mix as well as some chicken breasts for the next batch.

He’s just been doing so well, I want him to continue to do so! So we’re doing everything we can for him. 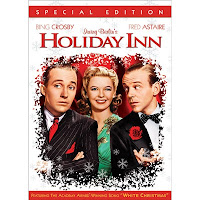 I just got the movie “Holiday Inn” on DVD…it’s a new version in COLOR, which is so cool. I’ve been watching this movie for YEARS…it’s our traditional Christmas Eve movie.
Yeah, I know it’s old…1942! And the original is in black and white, but I like the songs (I may have the soundtrack on my iPod LOL) and I like to have musical type movies on in the background when I’m on the computer…especially when there’s NOTHING on tv!
The hubbs keeps making fun of me because I’ve probably watched the movie 10 times since I got it, and I will watch it over and over again…but really it’s just background.

Men…they don’t get it! LOL