You are here: Home / home / Simplehuman Trash Can, Sak Purse, Missy to Vet! 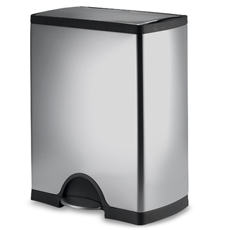 We went shopping tonight for a new stinking garbage can because Topaz has figured out how to opn the can even when it’s locked! We ended up getting another Simplehuman one. But this time it’s metal and big. I’m hoping he won’t be able to knock it over and get into it. The lid is flush to the top, so hopefully he won’t be able to open it. I swear, this is the last kitchen trash can I am buying. If this doesn’t work, we’re getting one that goes under the sink!!!!

Why didn’t we do that in the first place?? I hate those kind of trash cans…they’re just too small for us and we’d be changing the bag constantly.

So, I’m really hoping this works! I like it too because it’s bigger, will hold more, and because it’s metal you can smash the trash into it. heh

We’ll see…we have yet to really test it. 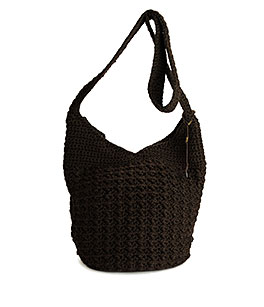 This is my new purse. I really like Sak purses. I wanted to get this one, but they didn’t have it at Macy’s. It was on the website though…but I couldn’t see spending the shipping money and waiting for it and everything when I could just pop in there and buy one. It was a really good deal too, it was 40% off! It was kind of a late anniversary gift from the hubbs. And he was a trooper too and shopped for it with me. He even gave his opinion, which he never does!

My poor little missy miss, Onyx, Ony girl has some horrible sores on her that she’s been chewing at for a while. For some reason, she always gets the itchies this time of year. When we got home from shopping, we noticed little tufts of black fur in the bed and when we checked her out, there was one spot that was pretty swollen and really raw. Poor baby!

So we took her to the vet. They said it’s not hotspots, and gave her doggie Benadryl to take for the itchies. It’s probably fall allergies or something. We also got a homeopathic spray for her. It’s called FidoDerm. It seems to be helping a bit! They also did a blood panel and she got her shots.

Her blood came back perfect!! She’s a little overweight, which we’re working on…

Garbage, the Husband and the OCD