You are here: Home / twilight / Twilight!!!!!! & The Latest Randomness 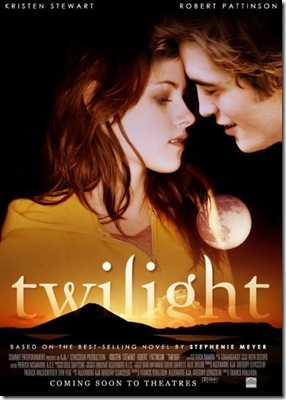 So I just realized that I haven’t written about the release of Twilight on DVD!!!

Of course, I got it. We got our copy at Borders…the hubbs volunteered to venture out and brave the swarms of screaming girls at midnight to get me a copy. Then he hurried home so we could be up half the night watching it!

Because I’m a HUGE Twilight obsessed geek, I also pre-ordered it on iTunes so I could put the movie on my iPod and listen to it at work…hehe! AND…i got all the extras too!!! Squeeeeeeeeeeeeeeeeeee!

Ugh, I make myself sick I’m so obsessed! LOL

So, I’ve watched the movie here at my desk at least 5 times and I’ve listened to it at work at least twice and watched the extras at work too…of course, on my lunch! haha I’m actually relistening to the books and am about halfway through Twilight. Whether I’ll move on to New Moon, I don’t know…I have a lot of other books to listen to.

Audible was having an AWESOME $4.95 sale not too long ago, so I bought a bunch of books. My iPod is now full of audiobookie goodness! Now to just listen to them all!

AND not ALL are even of the romantic/fantasy genre! Aren’t you proud of me? I do have a few that are of some substance! LOL I also have The Host by the same author who writes Twilight that I should actually listen to. It’s about aliens…

What else has been new in my world?

We had to start locking the Topaz up again when we leave the house. Last week he got into and ate an entire box of Quaker Raisins and Spice Oatmeal! Raisins!!! Ugh, scary stuff! Well, we took him to the vet and they induced vomiting and he wound up throwing all the raisins up. Thank God. He’s totally fine now. I swear, that dog has 9 lives! lol But, for his own safety and for our peace of mind…back to the cage he goes. He’s not thrilled about it, but it’s better this way all the way around!

He’s been seizure free for 44 days now too, which is a GREAT thing!! He bounced right back, which is awesome. Almost like the seizure never happened. And hey, if that’s how it’s gonna be, I’ll take it!

Oh, I basically abandoned the 365 blog. I couldn’t keep up with it and I actually kept forgetting to take pictures and was spending more time “catching up” than I was actually enjoying the challenge. So I may try in May to take a photo a day the entire month…or rededicate myself to it starting in May. I want to learn how to use my camera better and spring is coming and there will be PLENTY of beautiful photo ops coming up!

And Scrapping…well, my PC wouldn’t really even let Photoshop work right for a long time, so scrapping was out of the picture. We’ve fixed that now though…so let the scrapping continue! LOL

A Man and His Toys… *eyeroll*