You are here: Home / health / May Desktop, Lupus Diagnosis & A Few More Pix

First, I’d like to show off my May desktop that I just made!! My birthday is in May (16!) and so I wanted to make it birthday themed. It’s hard to come by a nice birthday kit for some reason, but as I was searching through my scrappy kits…which, let me say I have WAY too many of…I found a CUTE birthday kit by Ellie Lash! I don’t even remember buying it! It’s perfect though. 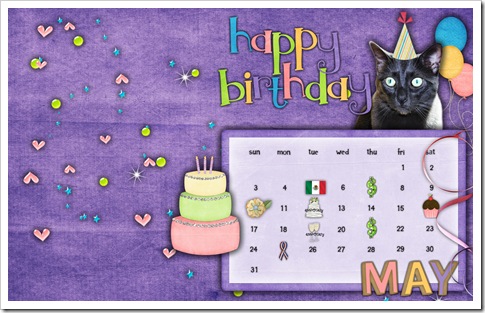 I usually “feature” one or more of our animals in the desktops and this month I am featuring Malcolm, or Mooshy as he’s better known. It’s kind of a joke because he’s the cat that gives me the most trouble. I call him “Malcolm J” also…the J is for jackass. LOL And I usually don’t cut the animal out like I did here either, but I wanted to put a silly little hat on him!

Anyway, I think it turned out great! I love purple, and it can’t get much more purple than it is. All the main elements and papers are from a kit called “Birthday Joy” by Ellie Lash and the two wedding (anniversary) graphics are from a freebie kit called “Summer Wedding” by Bon Scrapatit Designs. The yellow flower and leaf are from a kit called “Wildflower” that I got on the My Scrapbook Art forum. I believe it was also a freebie for NSD.

I was really tempted to make a Twilight themed desktop with Flergs’ new kit, but my laptop desktop is of Edward Cullen already, and I thought my husband may not want to stare at Edward like I would heh, so I spared him an Edward background…for now. hehe

On to other things…

My husband was recently diagnosed with Lupus on top of everything else he has going on. In all honestly, nothing much will change…but it’s just yet another diagnosis to add to his long list.

He has not been having the greatest time with the diagnosis. I think it’s because we’ve been dealing with APS now for 4 years and this is something new. Plus for whatever reason even though Lupus and APS are similar…sister diseases even…Lupus, to me, is much scarier than APS. And it really probably isn’t. But Lupus has a huge spectrum, I don’t know…I guess it’s just another thing to deal with. Hard for me to explain.

It’s almost like, I know APS. I basically know what to expect with it. Lupus…I have no clue. Guess I’ll need to learn about it just like I did with the APS.

The other thing that is bothering me is the whole kid thing. We probably won’t have kids for sure now. I have Lupus on my side of the family. My dad’s sister had it. And now, Todd has it…the poor kids will be doomed! I don’t want to do that!! And no, I’m really not ok with that. It really bothers me. But, there are alternatives…like adoption and I actually think I’d like to foster and then adopt, or just adopt. Babies make me really nervous, so maybe we could find an older child who needs loving parents. Maybe in the future. Who knows…

The only good thing about this dx being added is that he may be able to get on some other meds that might help him. Plus, it will help when it’s time to review his disability. I just hope he gets used to it, or is able to cope with it all. He’s had a hard time with that overall. I know he tries though.

Ok enough of that Lupus stuff for now. I’m sure we will revisit this at another time.

I’m gonna wrap up with some pictures I took of our Crab Apple tree that’s out front. It’s so pretty with little white flowers on it! Plus, I was trying to practice my Macro skills! I think these ones turned out pretty well! I like that you can see the tulips in the background of this one below…oh, and my car in the upper right! LOL This next one is my favorite, I think! I love the shadowing and the way the sun hits the leaves! So pretty! I may have to scrap some of these pretty pictures!