You are here: Home / husband / A Man and His Toys… *eyeroll* 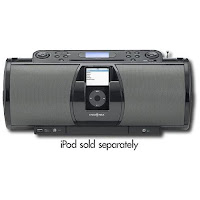 He got this radio <-- for Christmas last year. He really wanted an iPod radio and this was the one my mom picked out for him. A little background about the hubs before I get into the rant. He takes *very* good care of his things…anally good care. Like he’s a leave-the-little-plastic-sticker-on-things-until-it-falls-off-on-its-own kind of guy. Which is fine, it’s his thing and usually I don’t have to deal with it. He also values his items and “protects” them like they are gold. To me, an item is an item and most things can be fixed or replaced. To him, it’s his and it’s the last one on earth. He gets really bent out of shape if someone breaks something of his. Ok, so to the rant. When I do the dishes I like to listen to music. We have an under the counter radio in the kitchen and I’ve made cd’s from my fave list on my ipod and they don’t seem to work right so I’ll listen to one cd or else I’ll bring this ipod radio in there to listen to. Shouldn’t be a problem, right? Oh…but it is! I put it on the washing machine and he doesn’t want it there because the cats can get up there. He doesn’t want it on the counter because there’s not enough room (um, there’s PLENTY of room) and I may knock it down. He doesn’t want it on the fridge because it’s too high up. The baker’s rack is too wobbly, the bathroom sink is not big enough, the toilet is well…the toilet and there’s no plug in the dining room. So today I put it in the little window we have above the sink. Guess what? Too close to water. He’s afraid I’ll ruin his precious radio. Like we can’t replace the damn thing. it’s an ITEM! Not a living being or something like that….!!! Ugh!!! Obviously he doesn’t want me using the thing, so I’m not going to anymore. It’s so irritating…all this mine/yours bullshit. We’re married fgs!! What’s yours is mine and what’s mine is yours…what happened to that. If we want to be so technical about it, the computer is mine. I bought 1/2 of it with MY money and my mom bought the rest of it for ME…not him, ME. But do I pull that card out on him? never. I’m going to be getting myself my very own little ipod radio and permanently put it in the kitchen on the baker’s rack. that way I can listen to it when I take a shower and when I do dishes and things. Screw him and his radio. I’m so done with this argument. Why would I ruin it? geez. /rant.