You are here: Home / scrappy / The Hubs' Man Crush and other Randomness

My husband has a huge man crush on Dale Earnhardt Jr…good ole, #88. It’s his newest obsession. We must have all things with Amp, 88, or DEJ as I call him on it! And we need to get little toy cars, hats, shirts, jackets, bbq covers, license plates…etc!!! Good Lord!! I think he’s more in love with this guy than he is me! heh… Geez, I hope not anyways. lol
Actually, this Nascar thing is not new to me. My dad is a big fan and his fave was Dale Earnhardt. So I know all about the male Nascar obsession.
I just think it’s amusing and like to tease my dh about it. He went to an amp “Pit Pass” event at a Walmart in Flint, MI on Friday and he took my camera with him. He was hoping that a car would be there, but unfortunately, there wasn’t. He had a good time anyways.
Of course because we tease like that, I HAD to make a layout using some of the pictures he took! 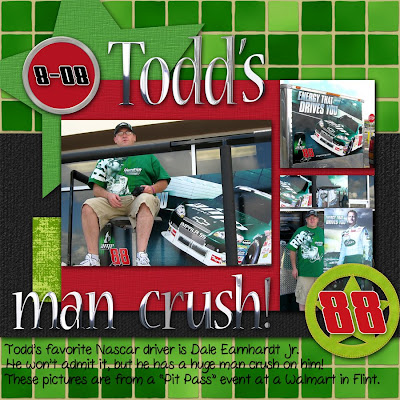 hehe…he may not be too happy with me when he sees that!! oh well…it’s SO true. He has a total man crush on DEJ.

On a similar note…today was the Woodward Dream Cruise. Basically, it’s a HUGE classic car show on a road and it stretches for miles and miles. Cars go “crusin” and there are about a million people there. If you are into that thing you will know exactly what I’m talking about. If you’re not…well it basically looks like this: 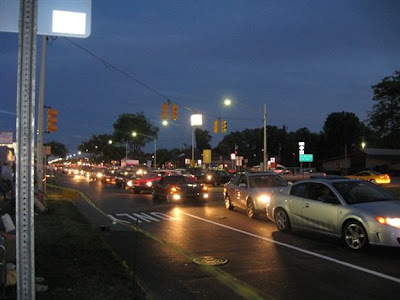 I took this photo last year on Friday, but it’s the same on Saturday. Anyway…my Dad and any “real” car guy spends just about the whole week on Woodward with their cars. My dad got interviewed by the local newspaper on Tuesday!! 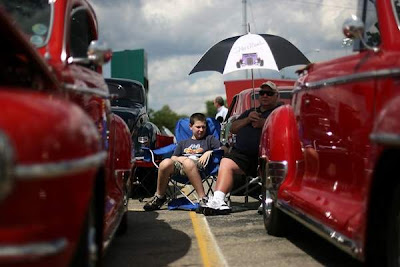 Here he is with my nephew, Elijah! His car is the one on the right. It’s a 1948 Plymouth Convertible. He also has a 1947 Plymouth Coupe that’s black.
We grew up with classic cars and car shows. My dad has those two cars now, but before that we had a dune buggy, a roadster that he built, and a 56 Chevy. I know some people wouldn’t understand sitting and watching cars go by for hours and hours, but I could and have totally done that. We used to drive to the UP every year for a car show in St. Ignance, MI when we were younger. It was always a good time. I like looking at cars. It’s the hot and the people I don’t like. lol
So, needless to say, I did not spent my day walking around in the sun and heat, breathing in exhaust on Woodward like I have previous years. Nope, not this girl…not this year. I did ride on Woodward last night with my dad, sister and the hubs. We were out there for like 2 hours and drove like 3 miles if that tells you anything!! Oh, and we were in a van and not one of the classic cars. Those cars tend to overheat in bumper to bumper traffic. lol
No, today I went to Red Robin for lunch, had a YUMMY Harvest Apple Chicken Salad and then went to a produce store and went grocery shopping with my 2 sisters. It was a good time.
Of course, when I got home I had to look for those millions of megabytes of free scrappy things that people are so generous with…oh and I went hog wild on some $1.00 fonts at scrapnfonts. I just love fonts. I have some issues.
Tomorrow it’s the dam dishes that I started last weekend…but never got around to finishing. Maybe I’ll take a picture and do a before and after comparison…although, it’s pretty embarassing.
Oh, and I need to get food for the pups and also pick up the mess of scripts at the pharmacy. We got my husband’s meds all worked out. I swear we will be spending close to 100.00 for scripts this month. Ugh. Oh well…they’re keeping him sane and alive.

This got long fast…drank an amp tonight (part of the man crush is keeping amp in the house heh) and omg…never again. I’m all hopped up on the caffiene!!! haha

I should add picture credits for this post: Dale Earnhardt Caricature  & Pict of my Dad and Elijah

A Man and His Toys… *eyeroll*