It’s Labor Day! And I’m off work, of course…praying and hoping that all goes well with our contract tomorrow and everything. I’m not worried about it, but I just want it to be over…either way. Let’s just get on with it and move on…I hate this unknown and waiting bullshit. lol enough already!!

I’m finally trying to get the dishes done. Every time I’ve went to do them, I’ve done a load and that’s all…so then they continue to pile up. Well I have one load in and when it’s done, I’m going in for the next load. I would like to finish them if possible! They need to be done.

I’m having a problem with my dish wands though. Right now I have two that are like the one below on the left. One is a Scotch Brite one and the other is from Target I believe and may be an o-cel-o one or else it’s Target’s brand. They both leak soap. Now that I’m looking…they’re both made by 3M. 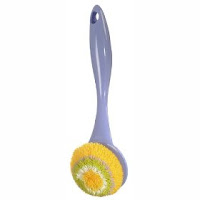 I also have a different scrubbie wand like the one on the right that does not have a soap dispenser on it. I got it at Bed Bath and Beyond and I love it!! It’s made by Casabella. They had one that had a replacable brush on it, but I don’t think it had a soap wand.
I’m looking for a good soap dispensing wand that doesn’t leak. I may try the oXo ones, they have a few different ones. They even have one that’s metal! LOL
Does anyone have any suggestions?? I hate that these leak!!
Thrilling conversation, isn’t it… Ok on to different and better things…how about scrappy type things??
I read on Vicki’s blog that if you register for Scrap N’ Art’s eZine you will get three free full kits. She showed pictures of two of them and the other was a surprise. I registered and I’ll be honest…it was originally for the freebies, but it’s actually a really good magazine!! I loved reading it and seeing all of the digi layouts and hybrid projects. Plus, it has some how-to’s in there too. I also downloaded the last issue (and got those freebies!) and that one was also awesome. They do a great job! If you haven’t checked it out, make sure you do. Oh!, and there’s also coupons to their store in there. LOTS of them! Like every artist has one. Check it out, you won’t be sorry!
I’ve been saving this and adding to it inbetween doing the dishes. They’re almost done. 2nd load is in…see, I told you they were ALL dirty!! lol…we are pigs, I know. I despise doing the dishes! But one more load and they will be finshed and the kitchen will be clean!! Woo Hoo!
The hubbs is on his way home…he worked a full day today, so he’ll be really tired. He’s got a full schedule this week…which is good moneywise, but not really good for his health. We’re going to BBQ these yummy apple maple chicken sausages and have chips with them. I want to eat outside, but he probably won’t go for it…lol not after working in a hot store all day!
I will try to make a scrappy page later on, since my shows are on tonight and I’ll be in here most of the night.

Garbage, the Husband and the OCD