You are here: Home / zoo / Building a Better Kitty Litter Box
I hate to say I’m not a good person to have cats, I just am not a good person to keep up with a litterbox like it probably needs, or like I should. I’ll admit it, I’m just not good at keeping up with the boxes, which is probably most of the reason why we have problems.

Right now we have 4 litterboxes in a small 3rd bedroom. 2 are large and 2 are small. All are hooded. We use non clumping, clay litter and we completely dump them once a week. We also use litterbags.

We have a problem with odor and with going outside the box.

I have been thinking about making our own litterboxes out of rubbermaid containers similar to these: 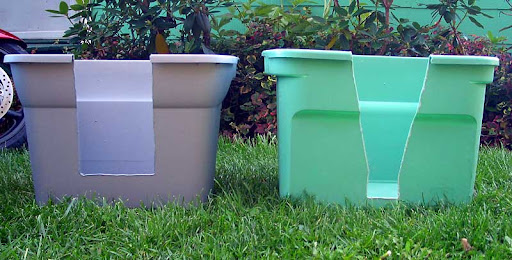 They come from this site. On that site there’s also information about “The World’s Best Cat Litter”. In their findings, which are on this page of their site, they say that they did a side by side comparison of TWBCL and a certain kind of poultry feed. That the two products, to their nose and eyes, are very similar.

This is what they use for litter in their litterboxes. I’ve often looked at TWBCL and I always liked using clumping litter because the odor control was MUCH MUCH better, but like I said above…I am a lazy kitty owner when it comes to their potties.

So, what I plan to do is make 3 of those types of boxes. In one I want to put TWBCL, in another I’d like to put the clay litter we’re using now and in the 3rd I want to put the poultry feed. Then I can do my own comparison and transition the kitties to the new “litter” at the same time…if we like it.

I also like the idea of homemade boxes, they are bigger…won’t be covered…and no bags! i hate those damn bags…they’re so expensive and the urine just pools to the bottom of them and makes the entire back of my house smell like cat urine after like a day of us changing the boxes. Which sucks!! Plus, if the boxes need replacing it’s a quick trip to target or somewhere to pick up a new box.

Of course, I’ll have to stop being a lazy kitty mom and actually scoop a box. I’ve done it before…so time to get back on it!